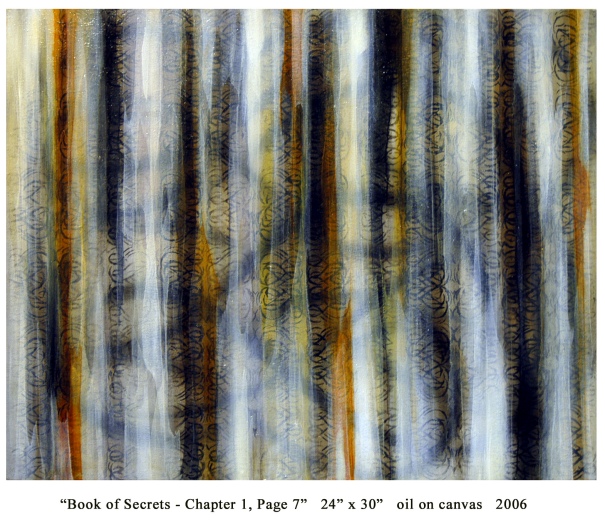 “A courier came into the outer office with an urgent cable for
my boss.” (Ellsberg, p. 7)

“The courier handed me the cable and left.” (Ellsberg, p. 7)

What is artist Shane Guffogg hiding in this frenzied batik motif that repeats?
Clandestine “fragments of obscure and ancient scripts”? **

What am I hiding — as if there were a dead body in the picture? What am I (not) telling?
Whose guts get spilled in serpentine code?

{I encode my confessions, too.}

There’s violence in the striated licks — like punishment for thinking
that art can call down the gods & that painting is magic.
“I wanted to be a magician,” Shane said.

I can’t find a focal point in this “Book of Secrets” painting. The veils upon veils dis-
Orient me. [Is Shane using a signature ‘chop’?]
I see score marks, like this: ||||

“he [my new boss] was down the hall with Secretary of Defense
Robert McNamara.” (Ellsberg, p. 7)

Shane uses a gesture-grammar to paint in a proto-language that’s entirely syntax.
Or it’s just one swooping, topsy-turvy, meaningless mark after another.

{INSERT THE NAMES OF THE PAINT COLORS GUFFOGG USED}

[Is Daniel Ellsberg’s book Secrets*** the source text for this painting? I found all these quotes in Chapter 1 on page 7. Just a coincidence?? How could it be?]

“He [the American commodore] said he was under attack by North
Vietnamese patrol boats and had opened fire on them.” (Ellsberg, p. 7)

Guffogg’s “Book of Secrets, Chapter 1, Page 7” is a painting of lazy infinity symbols on
tape loop. They’re painted Mars Black & Transparent Red Earth, then hit with a turpentine burn or a Burnt-Sienna glaze.

{Is Burnt Sienna his Agent Orange?}

(I) Break the ancient mirror to find her image,
(I) Fold the faded clothes to preserve her scent.

“In Memory of Thi Bang” by King Tu Duc

I’ll say the white streaks foregrounded in the painting are the contrails of American jets;
the deep blue streaks are the jet stream on which the warplanes flew.

“It was from Captain John Herrick, the commodore of a two-destroyer
flotilla in the Tonkin Gulf of North Vietnam in the South China Sea.” (Ellsberg, p. 7)

I can’t believe the series of ciphers-codes-marks in this painting are painted by hand.
Look at this pattern again, but larger:

It’s too perfect, right? But I’m studying a reproduction of the painting, not the original.

[Shane, were you named after that Alan Ladd movie?]

“He was in international waters.” (Ellsberg, p. 7)

Was Abstract Expressionism an international art movement, or only an American one?
[Look at post-war German Expressionism, esp. Anselm Kiefer and the volume of ekphrastic
poems on his work. Check out Jorie Graham’s poem re. line lengths.]

I’d like to print this piece out horizontally, like a scroll. I think that would be more enticing to decode.

I forgot I’m writing [about] a “Book of Secrets.” Am I telling any?

[Ask Shane why he did he so many of these paintings. Does he have that many secrets?]

In Shane’s other “Book of Secrets” paintings, the background marks are magnified—figure and ground shift. The abstract, calligraphic motif is larger, but still indecipherable.

I love this painting’s intensity, but it’s unsettling—it makes me think of being on the set of Graham Greene’s Quiet American, or inside the gorgeous & languid Vietnamese film, “The Scent of Green Papaya.” All my other images of Vietnam are from the nightly newscasts, anti-war protests, and B&W war-time photos, 1967–1977.

Coco Owen is a stay-at-home poet in Los Angeles. She has published poems in the Antioch Review, 1913, CutBank, The Journal, Rio Grande Review and Loose Change, among other venues. She has been a finalist in several recent book contests and has a mini chapbook with Binge Press. Owen serves on the board of Les Figues Press in Los Angeles.

Shane Guffogg received his B.F.A. from Cal Arts and lives in Los Angeles. Guffogg’s work is noted for the use of glazes in the tradition of the old masters, though his subject matter is abstraction. Guffogg founded Pharmaka, a non-profit gallery, in L.A., and was instrumental in starting the downtown Art Walk. He had a mid-career retrospective in Naples, Italy, in 2012 and has been in over 100 exhibitions in the U.S. and abroad.