On Marie Blanchard’s “Woman with a Fan” — Diane Kendig 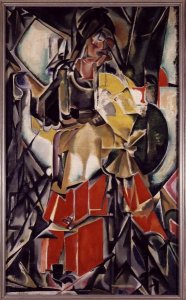 In the Reina Sofia Museum of Madrid

North of here, in the Palace of Catalan Music Hall,
fans froth its matinee audience,
plain and lacy, some sold to match
its stained glass windows, tiny mosaics of light
colorful as this painting’s big cubist blocks.

The fans could be waves made by women everywhere
except they are Spanish, not the screens of English ladies
nor the large cards stapled to paint sticks sponsored
by local funeral homes, sticking up like signs
in the church pews of my American childhood,

where Moms hissed, “Stop, it only makes you hotter.”
But the grandmothers wafted them through the warm air
and we slept under their movement.
Like castanets they are a Spanish prop, variable,
a line unfolding to a staircase, a keystone

supporting an arch–central, womanly.
Until now, I didn’t know so many portraits of women
lounging, sitting, standing with a fan. But this artist
fractured her model’s dress, spilled voluminous skirts
to the floor as many red books, stacked, scattered,

rising to a gold tablecloth draped at the waist where
her yellow fan opens against her black bodice.
I don’t understand how it is that perspective breaks down either,
but I see she is breaking it down, as Picasso broke down
the prostitutes, Rivera broke down an architect–

not her way, but a way. She had her vision, no pyrotechnics,
and she needed them, abstraction without becoming
abstracted, then splaying, allaying, spreading herself
into many points of view, as though taking up a flabellum.
We wake as she breezes into a new millennium.

Diane Kendig has published five collections of poetry, most recently Prison Terms, as well as publishing in journals such as Ekphrasis, Under the Sun , and Blueline. She is currently working on a chapbook of poems about the Spanish painter, Maria Blanchard and curating the Cuyahoga County Public Library site, “Read + Write: 30 Days of Poetry.” http://dianekendig.com/